On The Ecology of Gold & Dragons

Gold became the standard coin of trade first primarily for its metallurgic qualities, but it remained so because of its supra-natural qualities. Gold, you see, must constantly remain in circulation; the movement is essential to counteract the malign will of the gold itself. 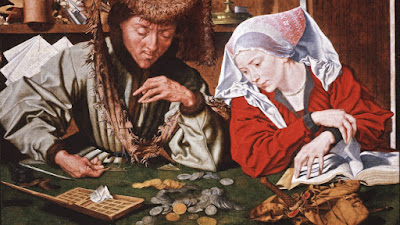 Gold is a heavy, lazy thing; it pulls itself towards the ground, and desires above all else to nap lazily in a cool, dark place, perhaps with a stray sunbeam warming its back, in a large pile of its kin. The subtle whispers it trickles in the ears of mortals, the sapping light it exudes, the way it pushes its weight all the way down to the boot heels of those who carry it, causing them to drag their feet, all compel those who carry gold disturbed from its slumber beneath the earth to return it to such a state, till eventually they lay all gathered somewhere in an enormous pile.

Two curious things happen when a concentration of gold is formed in this way. One, fearing that its slumber be disturbed again, it sends subtle vibrations through the air which induce a kind of monomania, causing heady fools to rush to discover and uncover it. Many will be drawn by this call, though inevitably violence will erupt and only the most brutal and deranged will lay claim to the prize. This is the first part of the selection process.

Upon finding such a cache, the victor naturally appropriates it in order to gain great power in the world of men. This involves, of course, some levying of the gold in trade, such that it moves again, but for the gold this is a small and necessary sacrifice; in the scale of its lifespan, this stage is but a speck. For the gold-mad inevitably build around themselves great fortresses, and send out others to bring back yet more gold, while they lay languorously and covetously on their pile, basking in the joys of accumulation, and stirring only on the occasions where yet more aurum is to be added to the pile.
Eventually the great lord or queen or viscountess or whatever she be passes out of public view, recedes into herself, till she seems to die. In yet another act of influence, her followers will be compelled to act with wanton destruction in burying their great ruler with their wealth, denying themselves the myriad use-values they could obtain. Here is where the gold begins its work in earnest.
On the still, barely living body of its soon to be guardian, it exerts its changes; fashioning the corpus into that of an eternal, living weapon who will ensure the gold shall never again be disturbed. 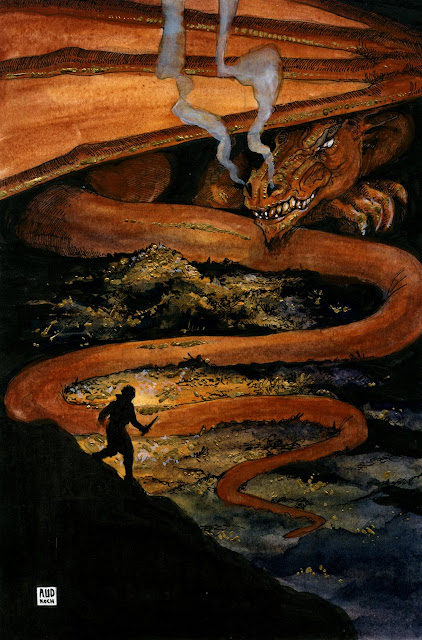 The gold will send this creature out to rescue more of its kin, such that their joys may be magnified by each other's presence. It will ensure that the beast lives as long as they do, and that as it ages they continue their work upon it to make it ever more fearsome. If the gold finds itself continually under threat, it may yet call out for and create even more dragons, who all by slumbering upon the same pile, gradually merge into an even greater monstrosity. 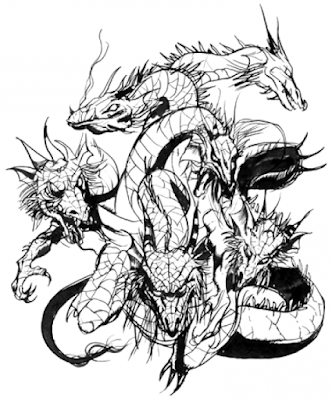 A Note on Playing Dragons

One of the things that strikes me every time I read Beowulf is the twinning of the hero and the dragon; the dragon emerges when Beowulf is at his most dragon-like, and he must become ever more a dragon in order to defeat him.
This applies to your standard D&D characters even more readily, I think, whose power grows in proportion to their material accumulation until they are literally possessive of abilities that allow them to go toe to toe with a dragon: in game terms, judging by AC, HP, and amount of damage that they can put out, the actual mechanical difference between them is negligible.
People always urge you to play dragons as if they are insane, though like most appeals to the pathological this is using tired ableism as a stand-in for actual characterization and motivation; some slightly better writers may pick a specific type of mental illness as a stand in, such as narcissism, or obsessive-compulsion, but this again lacks specificity.
If you actually want your dragon to come off like a terrifying, unpredictable, anti-social creature, as a DM you already have the perfect model right in front of you: your PCs. If we assume that all dragons were in fact once adventurers, this makes even more sense.
Take the worst, murderhobo-ey aspects of the PCs, the strange bizarre affect that comes from a character inhabiting a world that they know is fictitious and can actually have no lasting consequences on them, and multiply it ten-fold. Better yet, pick a specific PC in your group and do your best impression/caricature of them.
If you've got a multi-headed dragon, play the entire party. Fuck making them all different colours with different breath weapons: make one head a fighter, another a magic-user, a thief, a cleric, so on and give each head super-charged class powers.