Carrion is the endless city. Time began in
Carrion, and in Carrion shall it end.
When the world was new, the Hornèd
Mother's child, the demiurge Cannibal God,
bit her in half. She fell into the hole he had
created, for her body itself was the world.
There she crawled across the bottom of a
still and silent sea, till she beheld foggy
lights ahead. Crawling onto the oil-soaked
shale shore, she beheld a great city. Alas,
this city was Carrion. The people of the
town emerged, pale and mute, illuminated
by torch and lamplight. They carried with
them scalpels and saws.
Bit by bit they cut her to pieces. Little by
little they tore her apart. As her wails
pierced the air, none of the people made a
sound. They each carried a small piece of
the Hornèd Mother home, and left her body

there on the beach to be picked clean by the
crows, and scoured by the surf and shale.
By the Still Sea, beneath the Iron Moon,
one can still hear her weep. 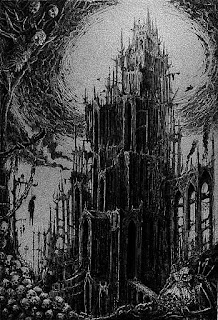 This blog is only posted to fitfully because I'm still dealing with working and going to school full time, and the neurotic soup of my brain sometimes makes it hard for me to keep up with OSR stuff, but I have a backlog of adventures I'm hoping to write up here, and am running a new campaign again.

The premise is that it's more or less a standard crapsack Gaslamp fantasy Victorian London knock-off like we've seen in Bloodborne or Sunless Sea, except it's literally endless. Apart from the sea, everything else is just urban sprawl. So wilderness is just derelict, condemned ghost towns, villages and towns are more like isolated suburbs, things that were mountains now become towers, and there's a whole lot of mansion-dungeons.

Here's a link to all my campaign material so far, which includes the handbooks for Mystics (modified from Logan Knight's rules), flowchart maps of the districts in the main, standard part of Carrion (which I generated with Logan Knight's Corpathium system, yeah at this point he basically co-wrote the campaign).