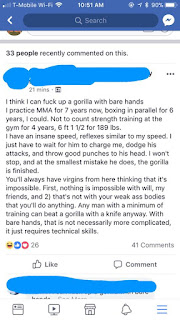 To be clear, not my own Facebook wall, just something shared to a group. And that sent me spiralling down a fucking hole of trying to determine how strong a gorilla actually is. The answer is, obviously,  really fucking strong.

"The strength of a silverback gorilla has never been measured, but it should be sufficient to say that anecdotal evidence of animals observed almost casually bending and snapping objects such as tempered steel bars (2 inches thick) and giant bamboo stalks, suggest that the gorilla has the muscle power of between 8-15 men and possibly more. Jersey Zoos Jambo was observed to hang from one arm (he was over 400 lbs) while methodically ripping over 200 ft of inner ceiling planks from the roof of the new gorilla house with his other arm (the planks were securely screwed and nailed), simply because he didn't like them. No other animal outside of the great apes has such a combination of strength and dexterity. The fact that gorillas don't use their strength to attack other animals in the manner of chimpanzees or baboons means very little as they are by their very nature, peaceful animals. Gorillas also have one of the most powerful jaws of any animal, which they use to get to the piths of various trees and plants. They can also use them in defense, and can inflict serious wounds with their bites if they so wish. Stories of their ferocity are largely unfounded, and when left alone, gorillas will never attack humans." 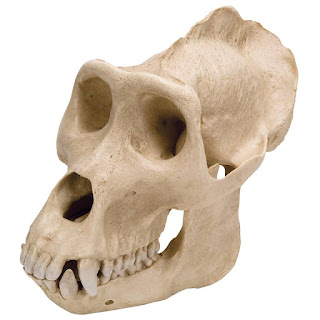 But I don't think you could beat a gorilla one on one with weaponry either. Look at how thick that skull is. Even a gun, you'd need something really high caliber and a few good precise shots. And that's assuming it's not angry and charging you, which I mean they're gorillas so probably not but if they were in this situation (i.e. a fight) then yeah you probably wouldn't take it down before it reached you.

A dude with a sword in some armour would just get absolutely demolished. Just one swing would dent platemail which is enough to pretty much kill someone. Even if you got some swings off, it would probably only just annoy the gorilla. There was that chimp, Travis, who mauled a woman's face a few years ago and he was stabbed a bunch of times to pretty much no effect. If you had a spear you could maybe get it through the face, but then the forward momentum would probably get the animal right to you and crush you in its death throes.

A wild animal will literally throw 100% of its resources into a fight, it's just instinct. A human being would never reach the same phase unless they were literally in a state of severe psychosis.

What are the D&D stats for this thing? Taking 5e as an example:

Honestly how the fuck could you even kill a dragon.

I mean obviously D&D stats aren't proportional but I feel like "how does your campaign handle gorillas" could be a benchmark for the way combat is run.