For the duration of Errant's Kickstarter I will be doing a series of posts where I go through Errant, more or less in order, diving into the design of the game and its inspirations. To follow along, I suggest reading the relevant section being discussed at errantrpg.carrd.co. 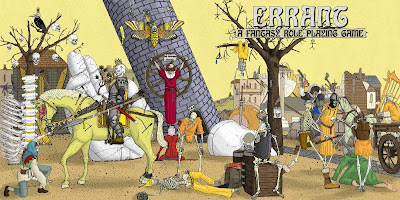 So to kick this off we're going to be looking at Errant's core rules, namely checks, attributes, and position & impact.

Ok so, the core mechanic of Errant is to roll a d20 equal to or below an attribute, and above a Difficulty Value. This isn't exactly a revolutionary or innovative mechanic, a variation on the ever popular roll-under mechanic that might be dubbed "roll high, under" or "blackjack"; most people will probably attribute it to Whitehack, which is where I got it from, which uses the same mechanic for making attacks (regular skill tasks are just a straight roll equal to or under), and its since shown up in games like Solar Blades & Cosmic Spells. However, the path I took to get here is pretty illustrative of the design history of Errant.
Like so many nerds I got back into this hobby with 5e, back in 2014, and after a while I quickly found that the best and coolest shit anyone was making for D&D was in this strange 'OSR' community. I made this blog, cause that's what the cool kids were doing, and posted very little of note, all the while wrestling with 5e to try to beat it into the shape of these OSR games everyone was talking about, with little success. The inertia of "first system learned" prevented me from actually going off and playing a proper retroclone, plus everyone I played with played 5e.
Eventually, however, I got tired of trying to work with something that didn't want to work with me, and resolved to find a new system. Co-incidentally, at the same time, The Black Hack came out, and like many other people I was completely wooed. The elegance and simplicity of the roll-under mechanic appealed to me, and its ultra-light nature was welcoming and accessible compared to what seemed the daunting inaccessibility of most of the retroclones of the day. Errant properly began life as a house hack of TBH, with me bolting on classes and making minor rules tweaks.
One of those very first tweaks that I made was to make modifiers apply not to the roll but to the stats: the Powerful Opponents rule in TBH 1e meant that you added the difference between your level and a monster's HD to your roll if it had more HD than your level. Positive modifiers were bad, and negative modifiers were good. I changed it to be more 'intuitive': if you added modifiers to your stats, positive was good and negative was bad. This seemingly innocuous house rule would have knock on effects.
The most popular blog post on here to this date is me hacking the TBH Powerful Opponents rule to represent variable AC. Eventually I started fiddling with this system enough, and trying to apply it to players, that I eventually ended up in a circumstance where, because I was adding a modifier to my player's STR score to defend, they became unhittable. After that session, I was looking for a solution, saw how elegantly Whitehack solved this same problem (ahhhh, roll above AC and equal/under score!) and switched to that for combat.
Around the same time, I like a fair few others, were coming out of the honeymoon phase with straight roll-under checks. Even with Advantage and Disadvantage, it didn't allow nuance in setting difficulty to different situations, and unfairly privileged characters with high stats.
I opted to use blackjack style rolls to deal with the first issue. One of the things I most enjoy about it is the ability to consider all the different situational factors at play when it comes to a check and allow them all to incrementally add to the difficulty, or vice versa for situational factors that can decrease difficulty. The way this is represented most clearly is in the use of navigation checks. 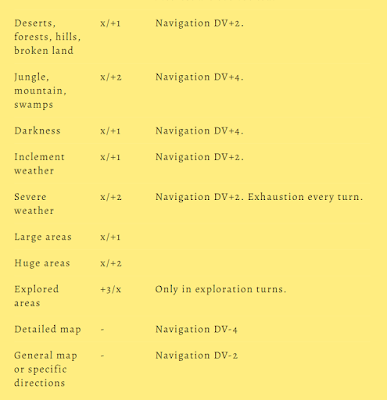 I know that these are functionally modifiers by another name, but the fact that you decide before you roll and don't have to do any futzing with adding numbers to the dice makes it seem easier and simpler to me. This is probably just perception/delusion on my end, but in the pursuit of subjective pleasure, perception is all that matters. It is still simpler than a similar DC style system a la 5e where both a target number is set and a roll is made with a bunch of modifiers applying to it.
Adding a Difficulty Value also goes some way to alleviating the problem of high stat characters, but I did a little bit of tinkering there also.

Attributes in Errant are rolled on a 4d4 instead of the traditional 3d6. Why? Well for one, a 4-16 range seems to me much more reasonable starting stats than 3-18. As well, on a 3d6, you have about a 19% chance to roll a score below a 7 or above a 14; on a 4d4, its about 8%. So the range is both more constrained, and the distribution skews more favourably towards average, playable stats. In a game where attributes matter, these are both important factors (Note: while the earlier version of Arnold K's GLOG used 4d4 for generating stats also, we seem to have arrived at this method independently).
As well, there are only 4 attributes in Errant, rather than the usual 6. Having a reduced number of attributes tips things back in the player's favour somewhat, to counterbalance the reduction in effectiveness of lower attribute scores and Difficulty Values, as it means that each attribute has a larger impact; as long as you've got one decent score, which is almost statistically certain, your character will be quite effective, and the lower scores are easier to patch up via character progression than if they were spread out over more attributes.
But why 4, versus the reduced 3 stats common to games like Into the Odd or Troika! I don't know if I can give a better reason than it just feels right; each attribute is important, but not too important, plus each Archetype is associated with a particular attribute (PHYS for the Violent, SKILL for the Deviant, MIND for the Occult, and PRES for the Zealot).
One aspect of Errant I anticipate might not be super popular is the fact that attributes are not just important in terms of determining character's effectiveness vis a vis the core mechanic of the game, but also affect derived attributes. PHYS and SKILL are probably the two most impactful ones in this aspect, with the former tripling as both your amount of item slots and your HP total, while the latter determines your movement speed in combat. There is a design trend to decouple such characteristics from stats, and I can certainly see the appeal in saying "every adventurer has 10 inventory slots."
However, I think that confronting deficiencies is a defining element of old school play. Just as your character is almost guaranteed to have one good attribute, so are they also likely to have one bad attribute. This forces a confrontation with the fact that your character has shortcomings, and is never going to be completely self-reliant. In order to overcome your flaws, you are going to have to engage with the world. Don't have enough inventory slots? Give some stuff to your team mate, or hire a porter. Too slow to move worth a damn? Get yourself a mount. Too broke to afford any of those things? Find someone to give you a loan (we'll get into Errant's debt mechanics later...). And of course, once you've got a loan, you're gonna have to scrounge up enough cash to pay it back, or do a favour for your debtor. By making characters bad at things, they are forced to engage with the game space beyond their character. 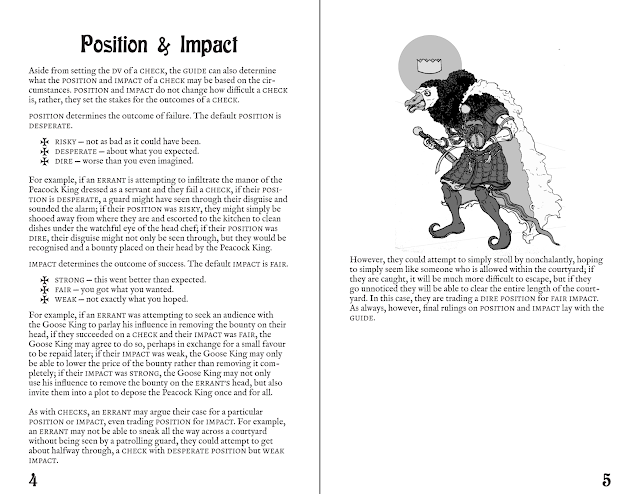 The Position & Impact rules are very clearly inspired by Blades in The Dark, but even moreso by this post by Chris McDowall and this post by Dreaming Dragonslayer discussing Chris' post.
I used to have alongside Difficulty Value for checks Advantage & Disadvantage (because that's what all the cool kids were doing), as well as critical hits & failures and degree of success determined by how high above the DV you rolled.
I eventually thought this was all too fussy and scrapped it all anyhow. Advantage & Disadvantage seemed especially redundant alongside DV; why have two mechanics that affect how difficult a situation is? I used to justify it by saying DV represented the difficulty of the situation and Advantage/Disadvantage a character's capabilities, but I think this is very weak, and its more streamlined to have everything represented by DV. Plus, Advantage & Disadvantage go against Errant's "as few rolls needed to accomplish one thing" ethos.
Criticals and degree of success went by the wayside for being finnicky, little used, and not adding much to the play experience. However, there wasn't anything that came along to replace them until I read those posts.
What I appreciate about Position & Impact is, even though I myself very rarely explicitly find myself saying the terms during a game session, they force the Guide and players to properly consider the fictional positioning behind every roll, as well as reinforcing the fact that every check needs to have clear and communicated stakes. With Position & Impact, there is no pixel bitching or gotcha GMing or rolls that do nothing to change the game state; everything is clear, transparent, and consequential.
While these terms or clarifying rolls like this might be a bit different than the way traditional OSR games do it, it isn't anything fundamentally new to the genre: think of Position & Impact as functionally "critical success/failure" switches, or degree of success mechanics, except instead of being arbitrarily determined by the result of a die, it arises from a player's approach and method to their task.
Alright, that's gonna wrap up the first one of these posts for me. I'll be back tomorrow (hopefully) to talk about the core procedures of Errant. Till then!
Posted by Ava at 18:01

Email ThisBlogThis!Share to TwitterShare to FacebookShare to Pinterest
Labels: errant