This is a post I had hoped to write back at the start of July, and so by now the little conversation I hoped to contribute to is far from au courant (especially given that the parties involved have all published follow up pieces [new links]), but I'll say my piece nonetheless.

The conversation was started by Joel over at Silverarm, regarding his preference for pointcrawls over hexcrawls:

A dungeon of 50 rooms laid out in a grid with all with doors leading to six other rooms wouldn’t be the most satisfactory for exploration. The overload of choices makes navigation a series of random choices with minor information.Why are so many hex crawl sandboxes formatted this way then? The same joys of making travel choices based on relevant information and limitation shouldn’t be left at the dungeon exit

It was picked up by Nova of Playful Void, who devises what she calls a "pathcrawl", a system that models the relative ease or difficulty of traversing a hex based on its terrain and the types of paths within it:

Now, I have no problem with either of these statements; I do quibble with their conclusions however. I do not think what Joel and Nova are describing are endemic features of hexcrawls at all; rather, they simply seem to be describing bad hex map design.

To bring it back to Joel's comparison of the hexcrawl vs dungeoncrawl, the solution to the arbitrary decision making and/or choice paralysis presented by the hypothetical grid dungeon with identical exits out of every room isn't devising an alternate system for navigating dungeons; it is making sure that the contents of your dungeon provide meaningful information that allows the players to navigate it. This is making sure your room exits, hell even your hallways, are differentiated; its about using clues, rumours, architecture, factions, and NPCs to all provide insights into the structure of the dungeon to make it navigable.

I suppose a hexcrawl might seem to only provide aimless, pathless wandering where one exit is as good as the other if you've got a map that looks like this... 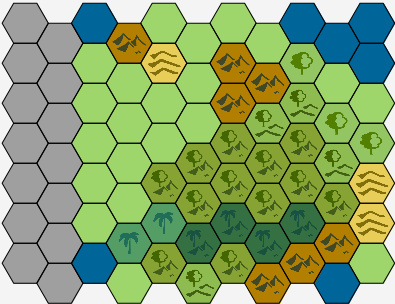 with really only terrain being the differentiating factor; no paths, no landmarks, no rivers, barely a coast. Though I don't think I have ever really played with a map that looks like the above. I might be biased here because for the past 3 years or so, I've been running a Dolmenwood campaign, which might have one of the best designed hex maps I've seen. Here is the version I made in HexKit for my players to use (which has some differences from the original). 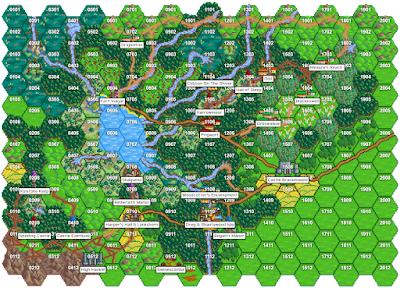 So just immediately at a glance we have roads of differing qualities, bodies of water (combined with elevation for differences in upriver vs downriver), landmarks visible on the horizon, towns and settlements, and different terrain types making up distinct regions of the map. This is not even getting into the stuff that isn't apparent, like the various overlapping territories of political control by various factions, the differing monster ecologies between regions, the various magical effects of the ley lines criss-crossing the wood etc. which the party pieces together from rumours, intelligence, and experience and mark up on their map. Given all of this, my players never arbitrarily decide which hex they want to move into; usually their path is quite considered, even when just in aimless exploration mode. They tend, as is smart, to stick to roads, shorelines, or forest lines to avoid getting lost, only going off track when absolutely necessary to reach a destination.

I actually would like to zoom in on a specific routing decision they made in one of our last sessions to break down the various factors going into their pathing decisions: 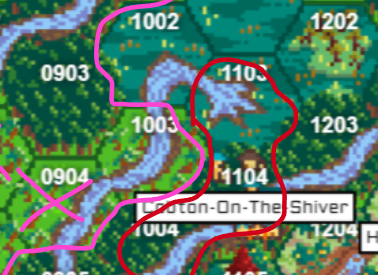 So in this case the party was located in hex 1004, and needed to get to hex 0903. The most direct route here would have been to go through hex 1003, but based on terrain, that would have seen them arriving at their destination at around nightfall. Important to note here is that the pink delimits the area under control of an enemy faction, whereas the red is the area under control of their faction. Instead of choosing to arrive at their destination at night, while travelling mostly through an area of enemy control and having a river to ford, they choose to go around, given that they had bases in 1104 and 1103 with known routes between them all (and hence no chance of getting lost), and spending the night camping at 1002 before entering hex 0903 in the morning.

So there are obviously many factors that go into making a hexmap meaningfully navigable, and on the system level Nova intuits that the most important factors are paths and terrain and their effects on slowing or speeding up the party's time. I suppose what I am perplexed by is, as evinced by my player's behaviour above, such considerations are already a standard part of hexcrawling rules. For example, here are the specific travel modifiers I use for terrain, which are largely equivalent with those found in B/X (OSE pictured). 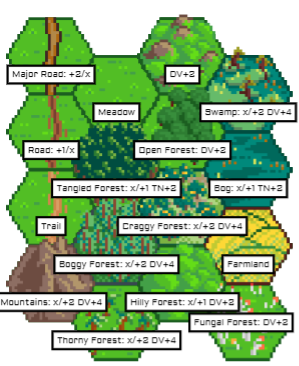 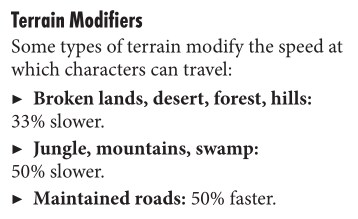 While this doesn't necessarily foreclose some types of terrain like Nova's pathcrawling system does, it does make them disadvantageous (especially when compounded with reduced movement rates from being heavily equipped) enough such that you are unlikely to attempt it except in specific circumstances.

This seems to me to be an issue of game design vs level design. Certainly these maps need a coherent travel system that accounts for variable movement, makes the passage of time meaningful via risk, etc. to present interesting navigation choices, but by and large I think those systems are present in our standard hexcrawling systems we have available (and of course, tweak and adjust the specific modifiers and so on to your taste, whether you want 6 watches or 4 watches in a day etc.). The other half of the heavy lifting though is done by the design of the map (and its contents) itself, using techniques like rumours, landmarks, and other means of connecting hexes meaningfully together.

In Joel's defence, I do think hexcrawling as originally intended, and the map presented in the original Avalon Hill Outdoor Survival that was the standard for campaigns is designed more for the kind of aimless exploration designed to clear wilderness, rather than focused directed travel. So why make the case for hexcrawls? Precisely because it works equally as well (in a small enough region) to account for both modes of travel without having to switch between systems; it can provide the flexibility and the nuance for players to go off-road, make foolhardy decisions to trek perilous terrain, or even navigate specific hexes at granular levels of detail (hexes that contain a road also contain much square mileage that isn't a road, that players can also explore). And of course, as demonstrated by Joel and many others, hexcrawls and pointcrawls are not incompatible at all, with pointcrawls being able to be layered both on top of and inside of hexes.

This style of hexcrawling is a more modern playstyle, in my estimation, and sometimes there are clashes in expectations between the original rules written presuming a roving quasi-wargame style of play, and the more intimate exploration focused play typical of the OSR and its descendents, but that is a topic I hope to address in another post (for now though, do read Dwiz's criminally underappreciated post on hexes as rulers vs hexes as containers, which I think elucidates a crucial aspect of this divide).