I've begun editing Marcia's OD&D retroclone Fantastic Medieval Campaigns. Since the aim of her project is not clarification or interpretation, but rather fidelity to the original text, we have been having a fair amount of conversations about the game's exasperating idiosyncrasies. One such conversation turned to the possibility of presenting an alternate universe take of Supplement I: Greyhawk that is actually, well, good. In particular, how to design a thief class that does not take away from the core locus of play in OD&D to the extent that the version released in our timeline does, while still retaining a design sensibility that doesn't feel out of place in the 1974 context. This is my take on such a challenge that emerged from our conversations.

Hit die, attack progression, experience progression, prime requisites, equipment restrictions, and saving throws all remain the same. Don't use variable weapon damage.
I) Thieves may use all magic items, scrolls, potions, etc. regardless of any restrictions (either of the magic item, or the thief's own equipment restriction).
2) If a thief steals an item of treasure from a monster with a value in gold pieces equalling or greater than the monster's hit dice multiplied by a thousand, they may once per day use an ability of that monster, e.g. if the thief has stolen a torc worth three thousand gold pieces from a wight, then once per day they may attack using a wight's level drain ability. Each treasure can be utilized only once per day, and the thief may only utilize in total a number of treasures not exceeding their level. Items stolen for these purposes do not contribute their value in experience points when recovered.

3) Thieves may be awarded experience above a 1 to 1 basis.

4) Thieves may be awarded experience above what is required to increase them by one level in a session.

So the problem often stated with thieves as they appear in Greyhawk is that by codifying rules for common adventuring skills, they limit the play capacity for what should be ordinary dungeoneering skills for every type of player character. As is often said, "every player character in D&D is a thief."

With that in mind, I removed abilities that would ostensibly make thieves "better" at thieving than other character types (though thieves are, notoriously, awful at thieving as written in the original rules). With that in mind, given that every character ought to be a "thief", I also think it applicable to allow backstab bonuses for all characters. Instead, thieves are rather rewarded more, and thus incentivized more, for thieving. They are thieves not be virtue of ability, but by desire.
They do of course have a seemingly supernatural propensity for theft not just of physical goods, but of immaterial attributes themselves. This is probably the mechanic least in line with a 1974 design ethos, but there a couple of interesting things I like about it.
First of all, beyond encouraging thieves to go after high ticket items from dangerous creatures, it adds a little bit of friction to group play in a way that I find interesting, rather than infuriating. It is a cliché for the thief in the party to attempt to filch items from other players or from the treasure hoard before anyone sees; while this kind of antagonistic PvP play is generally not conducive to good table experiences, there is something appealing in its quintessential fantasy, the almost stereotypical idea of a classic Gygaxian adventuring party. By removing high value items from the shared experience pool, there remains this tension of the selfish thief somewhat apart from the party, but it is a tactical decision that can be decided upon by the party: give up some XP in exchange for an ace up the sleeve. I imagine amongst a group of mature players it could be pretty fairly negotiated if the party decided that they didn't think the XP loss was worth the upside.
There is also the tension introduced by the thief potentially being desirous of all magical items. I think this adds a bit of flavour, but in practice I don't see it causing too much conflict; the proper distribution of magical items I think will remain obvious, with the thief getting the items that are otherwise underutilized or unusable by any other party member.
Finally, the last two abilities are me engaging playfully with what I think are some of OD&D's more baroque and nonsensical rules. 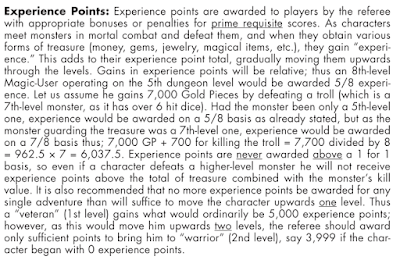 In practice, this means the thief will want to push farther, deeper, and longer than other players, because the rewards for them are greater. It also creates a bit of a trinity of countervailing forces regarding the thief's level progression: they have the fastest level progression of all classes, but this is throttled somewhat if they choose to accumulate treasure for the purposes of using monster abilities, but can again be accelerated should they choose to attempt riskier delves on deeper dungeon floors. A pleasing calculus of risk vs reward that fits rather thematically, in my opinion; a greedy ne'er do well, the devil on the party's shoulder whispering to them to push their luck. "One more roll, one more room, we're on a hot streak, we can't lose!"
Level fast, die young.

Email ThisBlogThis!Share to TwitterShare to FacebookShare to Pinterest
Labels: class